Following in the footsteps of London’s best pizzeria is no easy task, even if the feet in question are your own.  We were eager to see how the team from Ealing’s Santa Maria were settling into their second home, in Kensal Rise, so we braved the cold and headed over to Sacro Cuore to see how it measures up.

The first thing that struck us was the space; while not large by any means, Sacro Cuore is significantly more accommodating than the miniature venue that Santa Maria occupies.  However in spite of this, even late on a Tuesday night the restaurant was half-full, boding well for the quality of what was on offer.

We shared a garlic mozzarella focaccia to start which served as a perfect reminder of why these pizzas are so revered. The mouth-watering yet simple flavours are balanced perfectly against a delicious crust which combines seared crispiness with tasty chewiness – the kind of artisanal base that easily puts the majority of London pizzerias to shame.

The menu is the same as at Santa Maria, though at Sacro Cuore they have dispensed with the saintly titles and opted for more familiar names. The Diavola (Santa Caterina) is a punchy combination of imported Neapolitan salame and fresh red chilli; while the intense, salty flavours of the juicy Napoli (San Gennaro) make it one of the best examples of this pizza in London. The Salsiccia e Friarielli (San Giuseppe), with its fennel sausage and robustly-flavoured ‘Italian broccoli’, is an old favourite of ours and was…dare we say it…perhaps even better than at Santa Maria! 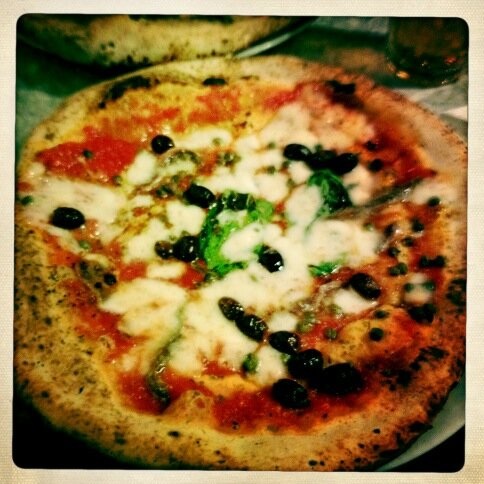 We rounded off the meal with a variety of ice creams which, as in Ealing, are sourced from the legendary Oddono’s and are not to be missed. The affogato al caffe was a particularly good, though the equivalent dish featuring lemon sorbet and limoncello also looked very tempting.

All in all we were left highly satisfied by our trip to Sacro Cuore where the Santa Maria magic is clearly hard at work. If pushed, we’d have to say our loyalties still lie with the Ealing original, but with top-notch pizzas being turned out of their wood-burning oven in record time, Sacro Cuore is a very welcome addition to the area and already seems to be building up quite a following.