A welcome new addition to a former pizza wasteland

It’s surprising, given the concentration of restaurants catering to practically every cuisine under the sun, that Soho isn’t exactly overburdened with great pizza. Taking aside the ubiquitous Pizza Express and the pleasant but workmanlike Soho Joe, the humble pizza seems to be woefully underrepresented in the area.

It’s a different story during daylight hours of course, with Pizza Pilgrims serving up cheap and mouthwatering discs in Berwick Street Market and a regular queue forming for a slice from the venerable Malletti, tucked away on Noel Street. However, if you were looking for a post-work option, you’d struggle. 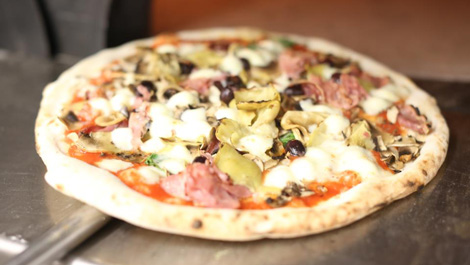 Therefore, the arrival of newcomer B-Soho at the end of last year was a welcome one, with the restaurant opening up across two spacious floors on Poland Street. Alongside filling an obvious gap in the market, the restaurant’s main boast is its hand-built Forno Tradizionale Napolitano brick oven, reaching 900°F and capable of turning out pizzas in just 90 seconds.

As fans of this blog will know, that’s the kind of in-and-out oven time that usually yields the finest wood-fired pizzas, so our expectations were high going in. Fortunately, we weren’t disappointed, as bases and crusts were note perfect, boasting a scorched outer shell and just enough elasticity to guarantee a satisfyingly chewy bite. So far, so good.

Head chef Raffaele Medaglia is Naples born and bred, a background that’s reflected by a pleasingly traditional menu. We opted for the Don Piccante (spicy salame, mozzarella and tomato) and the Don Vincenzo (Italian sausage, broccoletti and mozzerella). Both were excellent, and extremely liberally topped. The Don Vincenzo was particularly impressive, with a delicious smokey flavour and some top-notch sausage. It was one of the best takes on the old Neapolitan staple we’ve found in the capital so far.

Elsewhere, an unremarkable bruschetta was a slightly flaccid beginning to the meal (opt for the fresh and flavoursome tomato and mozzerella salad instead), while a pleasingly zingy range of gelatos are the pick of the desserts. However, it’s undoubtably the pizzas that are the stars of the show here.

A brief word for the venue itself, specifically the toilets. While you might expect to find a toilet attendant in the bathrooms at a grotty nightclub, you wouldn’t anticipate being confronted by one in the facilities of a Soho restaurant. The one bum note in a slick operation, it’s something we’d like to see sorted by our next visit. Thanks to the quality of B-Soho’s pizzas, that shouldn’t be too far down the track…