Party pizzeria serves up a good slice with music, cocktails and ping-pong

It’s not often you find a pizza joint that notifies patrons about its strict policy on drugs, and the sign inside the doorway of PING is much more reminiscent of something you’d expect to find in a bar or club. But the new addition to Earls Court Road is no ordinary pizza restaurant.

PING is the brainchild of the team behind daytime party event Love Brunch and the London branch of celebrity hangout Bungalow 8, and their nightlife experience is very much in evidence. On arrival we were greeted by a girl armed with clipboard and earpiece; a sight familiar to anyone who has sampled London’s high-end bar scene. After verifying who we were, she were ushered us down some stairs to be met by an enthusiastic cheerleader who turned out to be our waitress and led us to our table.

We ordered two of PING’s signature cocktails and sat back on the artfully mismatched and slightly moth-eaten sofas to watch other patrons playing ping-pong on the tables from which the venue takes its name. As you’d expect, PING plays host to a variety of DJs and the music certainly adds to the atmosphere, though is louder than in most restaurants and probably not ideal for those looking for a quiet meal. 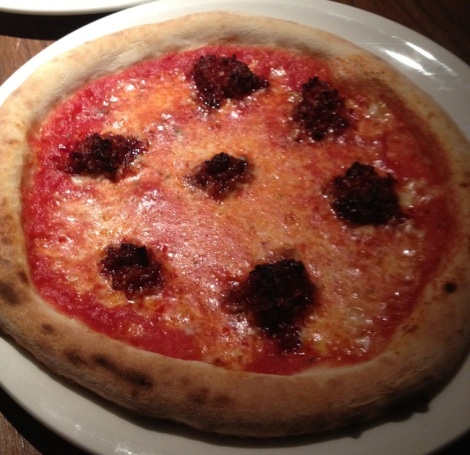 But if what you’re after is a good pizza, PING certainly delivers. At first glance the neat, symmetrical pizzas had little in common with the misshapen, plate-eclipsing offerings seen in many of London’s artisan pizzerias. But as we started to tuck in, the quality quickly became apparent.

PING’s pizzas are the handiwork of Bruno Elias, a graduate of the Pizza Italian Academy and something of a perfectionist when it comes to his craft. Our waitress explained that the dough is left to prove for an unusually long three days before cooking, resulting in a pleasantly chewy crust designed to avoid you feeling bloated afterwards.

The toppings too were very good, with the menu offering a mix of traditional Italian flavours alongside some more British numbers. We were unable to resist the ‘nduja-covered “Volcano”, and went for the egg and pancetta “Pick-me-up” as a second choice. Both were tasty but certainly benefitted from the addition of a few fresh basil leaves, which diners are encouraged to pluck from plants placed on each table.

PING offers patrons a party pizza, with the emphasis very much on the party. It is first and foremost a bar, and diners after a quiet night or a straightforward pizzeria should look elsewhere. But if you want to enjoy some quality pizza over cocktails, and even a spot of table-tennis, PING will certainly serve up a winner.