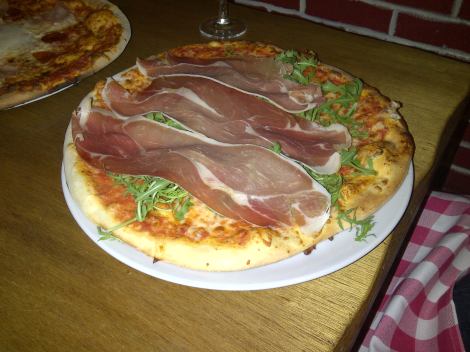 Cantuccio has chosen its name well. The Italian word means ‘corner’ or ‘nook’, which neatly suits the location of this Clapham pizzeria as well as its cosy, informal atmosphere. On arrival we were pleased to be greeted simultaneously by an elderly Italian waiter and the smoky aroma of the restaurant’s prized wood-burning oven. However our sense of anticipation turned quickly to agitation when we noticed the pizzaiolo busily working away at his pizzas… with a rolling pin.

Now we’ve always considered ourselves to be pretty discerning when it comes to pizza, and writing this blog has inevitably turned us into fully-fledged pizza snobs, so there’s a danger we’re overreacting. But we’re pretty sure that there’s no place for a rolling pin in an authentic Italian pizzeria. No sir.

It’s really important to have air in your pizza dough. This creates a lighter, crisper crust and allows it to cook faster. By taking his rolling pin to hunks of dough carved from an enormous slab at the side of the kitchen, Cantuccio’s pizzaiolo ended up forcing much of this air out of the base, risking a second-rate crust.

When the pizzas arrived it was clear that our fears had not been misplaced. Large and generously topped with what were clearly fresh, quality ingredients, the pizzas were let down by the crust. It was dense and lacking in flavour, with a floury texture that turned into paste in our mouths. In spite of more than four minutes in the oven – twice what you would normally expect – they still seemed undercooked. 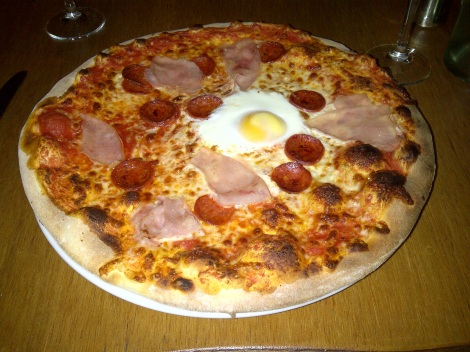 These pizzas had little in common with some of the deftly hand-stretched pizzas we’ve enjoyed in several other pizzerias around London and clearly demonstrate the value of taking the time to master traditional methods.

If you’re in the area and looking for a quick bite to eat you could do much worse than stop by Cantuccio. However if you’re after a great pizza we’d have to recommend Pizza Metro Pizza instead, a mere five minute walk down the road.