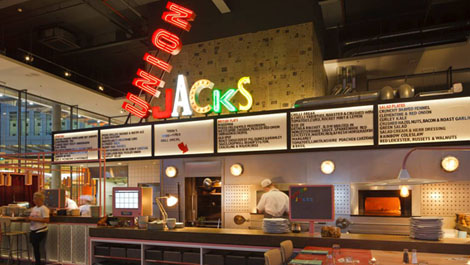 Much has been made of Jamie Oliver’s insistence that the dishes served in his new Union Jacks restaurant are “flats” rather than “pizzas”. Indeed, the whole ethos of this smart new outlet places great emphasis on the British dining experience – ingredients are almost uniformly sourced locally with a list of suppliers handily inset between the pages of the menu, while starters offer a modern twist on traditional seaside fare such as Devonshire crab and potted prawns.

However, it’s the much-trumpeted “flats” that form the centrepiece of the menu. So what is it that differentiates a flat from your common or garden pizza? Well for a start there’s not a blob of mozzarella in sight, with British substitutes ranging from Red Leicester to Stilton, and a couple of flats dispensing with cheese altogether.

The Stargazy was one such option, combining sweet and sticky onion with crushed tomatoes and filleted Cornish sardines to pleasingly delicate effect. The Red Ox was a heartier affair, with Red Leicester, horseradish and a mixture of braised oxtail and brisket giving it the air of a luxurious croque monsieur. The flavour combinations were expertly balanced, with topping-coverage landing just the right side of sparse. 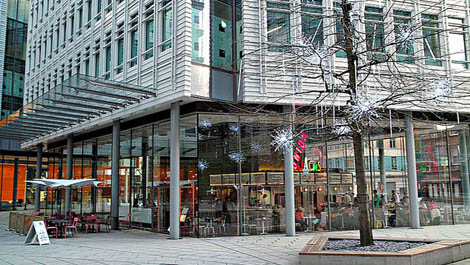 However, the term “flat” is just a cutesy marketing ploy: no matter how unusual the flavour combinations, these are unquestionably pizzas. What’s more, they’re pizzas that have been crafted with genuine love. Bases were wafer-thin and perfectly crisp, whilst fluffy crusts had adopted a wonderful smoky taste from the wood-fired ovens. Make no mistake, this is pizza craftsmanship at its most meticulous.

Desserts were similarly pleasing, with a range of homemade ice-creams well worth exploration. Our Earl Grey Tea & Biscuits variety was surprisingly flavoursome, and a bargain at just £1.50 for a generous scoop. Indeed, pricing is remarkably fair across the menu, with pizzas peaking at £12 and starters hovering around the £5 mark. The delicious Chapel Down Lager costs a London-typical £4 per pint, whilst wine is a little costlier, although bottles of “table wine” are available for £14.50.

All in all, Union Jacks is a must-visit location for lovers of the more experimental pizza. Unlike such novelty outfits as Fire and Stone, the flavour combinations here have been devised with real care and thought, making for an unusual but rewarding dining experience. And with six more locations set to open in London throughout 2012, stilton and pigs shoulder pizzas might not seem unusual for very long…